Help us to understand the walking and cycling patterns of people along the route of the proposed Ulster Canal Greenway between Monaghan and Middletown.

Complete the survey, and you could win a bike worth €500, just in time for Christmas! 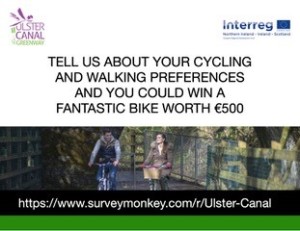 Armagh City, Banbridge and Craigavon Borough Council, in conjunction with the contracting authority Monaghan County Council, hereby gives notice of its intention to apply to develop a cross border greenway from Monaghan Town to Middletown, County Armagh. Totalling 12.2kms in length, some 2.5kms of this greenway is located in Northern Ireland. It extends from Ardgonnell Bridge on the border, at the River Cor, to Annagola bridge near Middletown.

The proposed greenway in County Armagh follows the route of the Ulster Canal, part of which proceeds alongside the A3 primary road to Middletown. It comprises a 5m corridor incorporating a pathway up to 3m wide with a drainage/buffer verge up to 1m wide on each side. The pathway will consist of an unbound, granular surface course of gravel and dust. Additional works include: erection of one wooden footbridge alongside the existing Ardgonnell roadbridge; creation of parking and amenity area near Annagola Bridge, Middletown; and vegetation clearance and enhancement repairs to listed lockkeepers house (H815/11/033) and historic bridge and lock at Foyduff.

In addition to improving connectivity between communities on both sides of the border, the Greenway is intended to encourage active travel in preference to vehicular transport and to promote the area as a walking/cycling tourist destination.

Further to the public event recently held in the Markethouse, Main St, Middletown on Wednesday 19th August 2020, between the hours of 18:00 and 21:00, Armagh City, Banbridge and Craigavon Borough Council invites comments from the general public on this proposal.

The proposed route of the Greenway is shown at the following website address: https://ulstercanalgreenway.files.wordpress.com/2020/07/sheet-7-of-7-the-border-to-middletown.pdf

Any person wishing to make a comment relating to the proposal can do so via the PAN Feedback Form on the above website https://ulstercanalgreenway.com.  Alternatively, a submission can be made in writing, clearly marked “Cross Border Greenway from Monaghan Town to Middletown” to Dianne Kelly, Corporate Project Officer, Armagh City, Banbridge and Craigavon Borough Council, Banbridge Civic Building, Downshire Road, Banbridge, Co. Down, BT32 3JY or at the following email address: dianne.kelly@armaghbanbridgecraigavon.gov.uk.

The deadline for submissions is 4.00pm, Wednesday 4th November 2020.

This project is supported by the EU’s INTERREG VA Programme, which is managed by the Special EU Programmes Body.

We are pleased to announce that following a thorough route assessment process, the Preferred Route Corridor for the Ulster Canal Greenway Phase 2, Smithborough to Middletown, has now been selected.

The Preferred Route Drawings are available for your information on the project website here.

Over the coming weeks, a series of Public Information Events for communities along the route of the Greenway will be held. Landowners, local residents, and the general public are invited to attend to receive a presentation from the design team and to speak with them and make arrangements for follow up appointments on site as required.

These Public Information events will be held in:

These events will be run strictly in accordance with current government guidelines on the Covid 19 virus, and as such, the numbers attending each event must be controlled to ensure social distancing protocol is observed.

There will be three sessions at each venue, 6pm, 7pm and 8pm, and attendance is strictly by appointment only. Spaces at each session will be limited to 12 persons only. To book your place at one of these Public Information events, simply click on the appropriate link and book the date and time slot that is most convenient for you.

Alternatively,  feel free to give the project team a call on 086 4115313 and they will book you in. Unfortunately, only those who have pre-booked can be admitted.

Book a seat at Tyholland Event

Book a seat at Middletown Event

Book a seat at Smithborough Event

Following a thorough route assessment process, we are pleased to announce that the Preferred Route Corridor for the Ulster Canal Greenway Phase 2, Smithborough to Middletown, has now been selected.

Click on the links below to view drawings of the route.  To keep the file size manageable, we have split the drawings into separate pdf files, each one showing the equivalent of one A3 page-sized section of the route.

The route is arranged from west to east, ie from the Smithboro end to the Middletown end, and each file is named by the townlands that it covers.

The  Minister for Transport,  Tourism and Sport, Shane Ross TD and the Minister for Culture, Heritage and the Gaeltacht, Heather Humphreys TD,  have today launched the EU-funded €4.95m Ulster Canal Greenway Project which will see the development of an off-road sustainable travel route between Smithborough, Co Monaghan and Middletown, Co Armagh.

Minister Ross stated “This is a wonderful initiative. Greenways connect communities, promote healthier lifestyles and encourage engagement with the outdoors. They also offer active travel opportunities for both pedestrians and cyclists and have proven to be a major attraction for visitors.

I’m very pleased to be launching Phase 2 of the Ulster Canal Greenway here today. Creating a new Greenway involves years of planning, construction and goodwill from those in surrounding lands. But it’s a commitment that delivers back to the community in spades. This Greenway promises to be a major asset to surrounding areas, as it brings the old towpaths of the disused Ulster Canal back into use and extends the Monaghan Town Greenway by 22km in a very welcome cross-border project. By 2020, the Greenway will link Smithborough, Co Monaghan to Middleton, Co Armagh.

I very much look forward to making use of it in the future and I encourage you all to do likewise.”

The Ulster Canal Greenway (UCG) Phase 2 project is a pioneering move to develop the first sustainable transport alternative for cross-border commuters between Smithborough, Co. Monaghan and Middletown, Co. Armagh. Monaghan to Northern Ireland is the second highest of all South-North commuter flows, and Armagh to Ireland is the third highest of all North-South flows. The project valued at €4.95m aims to construct 22km of new cross-border Greenway by 2020 and actively to promote commuter behavioural change through a targeted community engagement programme. It will result in a 4.5% increase in the number of cross-border journeys via walking / cycling by 2023.  The project is designed to connect with the completed Phase I section, which utilises the disused Ulster Canal to provide a highly strategic route linking the east/ west sides of Monaghan.

Minister Heather Humphreys in who’s constituency the Greenway will run, said at the launch

“I am delighted that Waterways Ireland, an agency under the remit of my own Department, have agreed to act as the lead partner for this flagship cross-border project. The first phase of the Greenway, here in Monaghan, already attracts over 100,000 users per year and has been a fantastic success since it opened in 2014. The further expansion of the Greenway will strengthen cross border relations by directly linking communities North and South of the border. The provision of this landmark recreational amenity will also provide a huge tourism boost for County Monaghan and the wider border region. “

Speaking at the event Gina McIntyre, Chief Executive Officer with the Special EU Programmes Body, said: “When completed this cross border project will help to meet some important targets under the sustainable transport objective of the EU’s INTERREG VA Programme. It will encourage more people to get out of their cars and increase the number of cross-border journeys made by walking and cycling, thereby helping to reduce our collective carbon footprint.

“Not only will this produce many benefits for the region, but the project is also making a contribution towards the EU’s ‘Europe 2020’ strategy which has been specifically designed to reduce greenhouse gas emissions and help safeguard the environment,” she continued.

The Cathaoirleach of Monaghan County Council Cllr Cathy Bennett stated ‘The 4km Monaghan Town Greenway has been a huge success and it attracts over 100,000 users annually. I am delighted that the INTERREG VA programme is supporting the next 22km section of the Ulster Canal Greenway. This new phase of the greenway will join communities north and south of the border, bringing huge benefits to our area and encouraging even more people to get out walking and cycling on a daily basis.’

Alderman Elizabeth Ingram, Armagh City, Banbridge & Craigavon Borough Council stated “A key facet of our vision is to engage and support initiatives that protect and safeguard our environment for future generations to come that is why we are delighted to partner up on the EU funded Ulster Canal Greenway project. Bringing about substantial environmental benefits whilst enhancing the quality of life in the area, this pioneering project will deliver an alternative and sustainable pathway for cyclists and walkers to commute between both sides of the border. The collaborative project highlights our commitment to growing a connected, welcoming and healthy community.”

The project will also contribute to a deepened level of partnership between key stakeholders and to the development of expertise and dissemination of best practice in delivering cross-border projects.

We’ve commissioned a short video to mark the launch of the Ulster Canal Greenway Project.